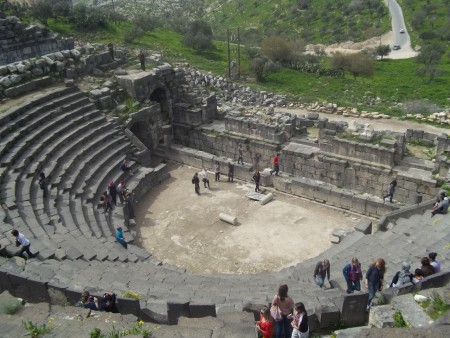 In addition to Jerash and Amman, Gadara (now Umm Qays) and Pella (Tabaqit Fahl) were once Decapolis cities, and each has unique appeal. Perched on a splendid hilltop overlooking the Jordan Valley and the Sea of Galilee, Umm Qays boasts impressive ancient remains, such as the stunning black basalt theatre, the basilica and adjacent courtyard strewn with nicely carved black sarcophagi, the colonnaded main street and a side street lined with shops, an underground mausoleum, two baths, a nymphaeum, a city gate and the faint outlines of what was a massive hippodrome.

﻿The old Decapolis city of Gadara (modern-day Umm Qays), with its spectacular panoramic views overlooking the Sea of Galilee, is the site of Jesus’ miracle of the Gadarene swine. It is here that He encountered a demented man who lived in the tombs near the entrance to the city; Jesus cast the bad spirits out of the man and into a herd of pigs, which then ran down the hill into the waters of the Sea of Galilee and drowned.

A rare five-aisled basilica from the 4th century was recently discovered and excavated at Umm Qays. It has been built directly over a Roman-Byzantine tomb and has a view into the tomb from the interior of the church. It is also located alongside the old Roman city gate on the road from the Sea of Galilee. Everything about this distinctive arrangement of a church above a tomb at this particular place, strongly indicates that it was designed and built to commemorate the very spot where the Byzantine faithful believed that Jesus performed his miracle.