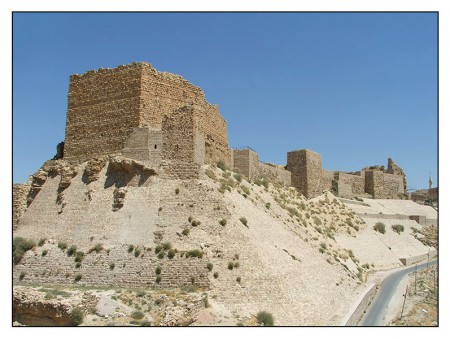 Whether you approach Kerak from the ancient Kings Highway to the east or from the Dead Sea to the west, the striking silhouette of this fortified town and castle will instantly make you understand why the fates of kings and nations were decided here for millennia. An ancient Crusader stronghold, Kerak sits 900m above sea level and lies inside the walls of the old city.

The city today is home to around 170,000 people and continues to boast a number of restored 19th century Ottoman buildings, restaurants, places to stay, and the like. But it is undoubtedly Kerak Castle that dominates. While the castle we see today essentially dates back to the 12th century, Kerak has been a fortress since biblical times. The Bible relates how the King of Israel and his allies from Judah and Edom ravaged Moab and besieged its king Mesha in the fortress of Kir Heres, as Kerak was then known.

Centuries later, it took the Crusaders some twenty years to erect their vast castle. Once finished in 1161, it became the residence of the lord of Transjordan, by then the most important fief of the Crusader kingdom, rich in produce and tax revenues.

After withstanding several sieges in the early 1170s, Kerak came under the rule of Reynald of Chatillon, a lord who became known for his recklessness and barbarism. Breaking all treaties, he began looting merchant caravans and Mecca-bound pilgrims, attacked the very homeland of Islam – the Hijaz – and raided Arabian ports on the Red Sea, even threatening Mecca itself. Saladin, the ruler of Syria and Egypt, reacted swiftly.

He took the town of Kerak by force, burned it down and almost managed to storm the castle as well.