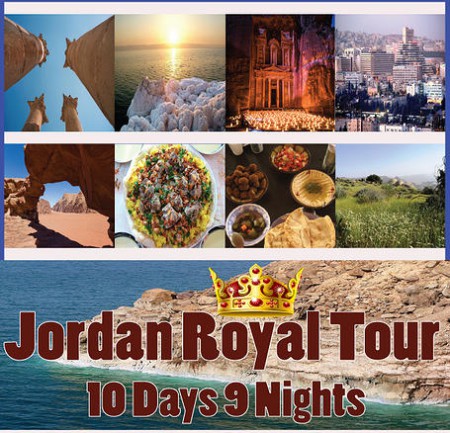 Arrival at Queen Alia International Airport, Meet & assist by our representative who will assist you in the Visas formalities. Then your vehicle will drive you to your hotel in Amman for the overnight.

Breakfast at the hotel, and start the day by a conducted tour of the capital: you will discover the resources and the culture of the Hashemite kingdom; its historic center, its citadel, its Roman amphitheater, its old mosques, its galleries and shops; but also the more modern center which confers on the city a duality and an exceptional character. then transfer to the east of Amman, to visit the Jordan's desert castles which are a beautiful examples of both early Islamic art and architecture, the visit will include the visit of Al-kharaneh Castle, Amra Palace, and Al-Azraq castle Overnight in Amman

Breakfast at the hotel, Then transfer to visit Bethany the place where Joshua, Elijah and Elisha crossed the Jordan River, Elijah was taken up to heaven, John the Baptist preached and baptized, and Jesus was baptized and started his public ministry. After the visit, continue to the Dead Sea, which is one of the most spectacular natural and spiritual landscapes in the whole world; it is the lowest point on earth, and the world's richest source of natural salts, hiding wonderful treasures that accumulated throughout thousands of years. It is believed to be the site of five biblical cities: Sodom, Gomorrah, Admah, Zebouin and Zoar, Free time to swim and to enjoy the salty water. Then transfer to Madaba for the overnight

Breakfast at the hotel, and start the day by visiting Madaba which is best known for its Byzantine and Umayyad mosaics, especially a large Byzantine-era mosaic map of The Holy Land. Then continue To the east of Madaba is Umm ar-Rasas, a very ancient site that is mentioned in both the Old and New Testaments of the Bible. The rectangular walled city is mostly in ruins but does still include several buildings, as well as four churches and some beautiful stone arches. The main attraction is outside the city walls within the Church of St. Stephen, which contains a very large, perfectly preserved mosaic floor laid down in 718 AD. Then coming to Mt. Nebo where Moses have gone to get a view of the Promised Land before he died and from a platform in front of the church one can enjoy a breathtaking view across the Jordan Valley and the Dead Sea At the end of the day Then continue south to visit Kerak with its magnificent Crusader castles “Crack des Moabites”, At the end of the day transfer direct to the Nabateans City of Petra for the overnight.

Breakfast at the hotel, and start a half day tour to discover the Nabateans City of Petra, the "pink city", which has been ranked New Wonders of the World Heritage of Humanity, it’s the home of the Nabateans; The complete city carved in a mountain with the huge colorful rocks that called “the red rose city”. The tour will start by crossing the “Siq” which is an impressive 1200 M long, deep and narrow gorge of stunning natural beauty. The Siq s hammed in by cliffs soaring up to 80 Meters. Then just when you think you have seen enough dazzling sights in the Siq, you will face with Al-Khazneh (the treasury) the pride of all Jordanians. The architectural style of it was unique in the ancient world, main inspiration was Hellenistic, Alexandrian Hellenistic, plus that unique encompassing Nabateans artistic touch (30 M Wide, and 43 M high) it is a truly breathtaking. Then we continue the visit and come to the Street of Facades the Theater which looks Roman but was executed by the Nabateans in the 1st Century AD, it is carved into solid Rock except towards the front earlier side, where part of it was built freestanding, initially it could seat 3000 People, but was later extended to finally hold about 7000. at the end of the day, back to the hotel for the overnight

Breakfast at the hotel then transfer to “Little Petra’, a part of Necropolis city. You will enjoy the view over the spectacular canyon. Then continue to Aqaba which is Jordan's only outlet to the sea, the tourist resort of Aqaba is known for its fantastic diving opportunities, mild winter climate and sandy beaches, and a full day to enjoy the crystal clear water, the spectacular fauna and flora of the red sea, free time to swim, to dive or to take sun bath. at the end of the visit, transfer to Wadi Rum, which is the biggest desert in Jordan and protected area where Sir Laurence wrote the seven pillars of wisdom. view the sunset and enjoy your overnight & dinner in the Desert.

Breakfast at the Camp, then enjoy a 2 hours Jeep tour in the desert, visiting: Bburrah canyon via Alameleh, khor um ishrin, Lawrence house, Siq Lawrence. Then we transfer direct to Dana Nature Reserve to discover its many treasures. You will witness the spectacle of the mountains offer ranging from Dana Jordan Rift Valley to the plains desert of Wadi Araba. Let yourself be fascinated by the plains of gravel mixed with sand dunes. In addition, you will discover a wide variety of wildlife including a variety of rare species of plants and animals. Overnight in Amman

Breakfast at hotel and free day in Amman / Overnight in Amman.

Breakfast at the hotel and regarding to the flight time your vehicle will drive you to the Q.A Airport for the final departure