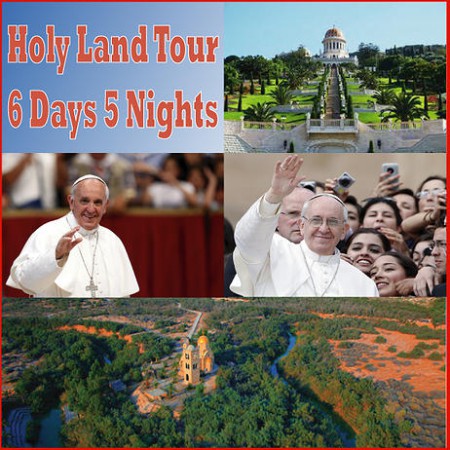 Arrival at Queen Alia International Airport, Meet & assist by our representative who will assist you in the Visas formalities. Then your vehicle will drive you to your hotel in Amman for the overnight.

Breakfast at the hotel, Then transfer to visit Bethany the place where Joshua, Elijah and Elisha crossed the Jordan River, Elijah was taken up to heaven, John the Baptist preached and baptized, and Jesus was baptized and started his public ministry. In Bethany also it’s revealed an earlier 3rd century building with fine mosaics and what is known as a Christian "prayer hall." If this is correct, it might be one of the earliest Christian prayer facilities anywhere in the world. Also identified is the cave where John the Baptist lived, according to numerous Byzantine pilgrims’ texts. The cave was turned into a church and a freshwater channel running from the cave, purportedly used by John for baptizing, can still be visited today. Then Within transfer to Mukawir, Which is the hilltop stronghold of Herod the Great. Upon Herod’s death, his son, Herod Antipas, inherited the fortress and it is from here that he ordered John the Baptist to be beheaded after Salome’s fateful dance. After the visit, continue to the Dead Sea, which is one of the most spectacular natural and spiritual landscapes in the whole world; it is the lowest point on earth, and the world's richest source of natural salts, hiding wonderful treasures that accumulated throughout thousands of years. It is believed to be the site of five biblical cities: Sodom, Gomorrah, Admah, Zebouin and Zoar. Free time to swim and to enjoy the salty water.

Return to Amman for the dinner and the overnight at the hotel.

Breakfast at the hotel, then transfer to visit Mount of Olives – Panoramic view over Jerusalem from Top of Mount of Olives – visit Garden of Gethsemane with its eight ancient olive-trees. After Christ and his disciples had celebrated the Last Supper on the day later known as Maundy Thursday he went with them "unto a place called Gethsemane" (Matthew 26,36); "and he was withdrawn from them about a stone's cast, and kneeled down, and prayed ... and being in an agony he prayed more earnestly" (Luke 22, 41 and 44). The disciples slept and left him alone in this hour of agony, and soon afterwards he was arrested and taken into the city. Then transfer to Bethlehem, visiting the Nativity Church and the Shepherds Field in Bethlehem, The Church of the Nativity in Bethlehem is one of the oldest continuously operating churches in the world. The structure is built over the cave that tradition marks as the birthplace of Jesus Christ, and thus it is considered one of the most sacred places for Christians. Dinner and overnight at the hotel in Jerusalem

Dinner & overnight at the hotel in Jerusalem

Breakfast at the hotel, transfer back to Allenby Bridge to Cross to Jordan side, Meet & Assist and transfer direct to

Visit Mt. Nebo where Moses have gone to get a view of the Promised Land before he died and from a platform in front of the church one can enjoy a breathtaking view across the Jordan Valley and the Dead Sea.
Then continue to Umm Ar-Rasas which is a very ancient site that is mentioned in both the Old and New Testaments of the Bible. The rectangular walled city is mostly in ruins but does still include several buildings, as well as four churches and some beautiful stone arches.  The main attraction is outside the city walls within the Church of St. Stephen, which contains a very large, perfectly preserved mosaic floor laid down in 718 AD. It portrays fifteen major cities of the Holy Land from both east and west of the River Jordan. This magnificent mosaic is second only to Madaba’s world famous mosaic map of Jerusalem and the Holy Land.Then transfer to visit Madaba Mosaic Map which is an index map of the region, dating from the sixth century AD, preserved in the floor of the Greek Orthodox Basilica of Saint George, with two million pieces of colored stone, the map depicts hills and valleys, villages and towns in Palestine and the Nile Delta. The mosaic contains the earliest extant representation of Byzantine Jerusalem, labeled the "Holy City."